I have been using this in a short depth rack now for a couple of months and it works really well taking just 2U spaces. It works when this is cascaded to it's sister the SD16 on the same AES50 link with long 50 meter Ethernet cables between both the units and the mixer I get solid sync and great performance from both units at the same time.

Interestingly, the ADAT outs on the S16 can be assigned to different AES50 lines from the outs on the front the S16 meaning that you can send different signals to the ADAT outs if you wish. Using this I have hooked up each of the ADATs to Behringer ADA8000s which converts the signal to analogue. I have the ADA8000 outs plugged into a Cymatic LR16 which I place in a short rack drawer with the back panel unscrewed to reveal the input jacks it also fits the USB hard disk. So now I can record 16 individual tracks onto the LR16 independently and at the same time whilst still using all the S16's functions and best of all it all fits nicely into a 6U SHORT rack for placing on stage. I just hit record at the start of the gig and it captures everything I need for remixing later.

Here is the format for the 6U short depth rack:

Cymatic have just released the UTrack X32 card which is available at Thomann this looks very interesting and does the same job at on the mixer side but allows 32!!! channel recording to usb HDD. Might have to put that one on the Xmas list :)
Helpful · Not helpful · Report
Report rating…

Send report
What can you say? Simply brilliant
26.09.2015
The sound is as good as it gets, and the protocol is so easy to use that it's crazy. You turn it on, plug it into one of the AES50 ports on the X32, and it simply works. Every time. No instability or strangeness - just works.

I ordered two S16s, but one of them had a faulty power supply, so I had to send it back. That was a bit sad, as I had to dig out the analog multicore the following concert to cover the last inputs. One of our helpers even managed to dig through the multicore with a shovel, so it lost a few channels. Had it been a CAT-5 cable, we could have just replaced that one cable cheaply.

But when that problem was fixed, I can't complain about anything. These units are brilliant. I just wish they weren't quite that expensive, maybe one to two hundred euros cheaper. But I see that the Midas preamps is what ramps up the price in both the X32 and the S16s, so it's all good, I guess!

Anyway, they are part of a brilliant, cheap system, that gives me a looot of functionality. It's all been said before. Behringer - thank you!
Helpful · Not helpful · Report
Report rating…

Send report
Wonderfull kit!
Koesbeenian, 10.11.2020
I use this as an extension of my X32 rack. It's brilliant. One remark: don't let you be misguided by anyone. You-have-to-use-the-correct-ethernet-cable! You cannot use a standard cable although it might fit. You can also NOT use a standard ethernet cable with ethercons although it might fit. You have to have Ethercon to Ethercon ground lead connected! Example:
Procab PRD520/10 CAT5e SF/UTP Ethercon
Helpful · Not helpful · Report
Report rating…

Send report
Never again 200lbs copper multi cable!
05.10.2014
Having bought two of these for use with my Behringer X32 mixer, I have permanently solved my biggest problems with signalling between stage and mixer, most often being the 200lbs, 50 foot long tangled maze of a multi cable that I have been struggling with up untill now. I have bought a couple of 2-unit Gator racks to put these stageboxes in, and so far it has proven a viable solution for my use (as long as no one steps on the Gator case). Combined with a couple of long ethernet cables, these two units have completely replaced the need for my old, heavy copper multi cable when on the move, e.g. using my X32 on live gigs. Since the S16s also use the same preamps as the X32, the sound produced is the same as if only using the analogue inputs on the mixer, which makes for several possible setups of preamps, both for studio recording and live sound engineering.
Helpful · Not helpful · Report
Report rating… 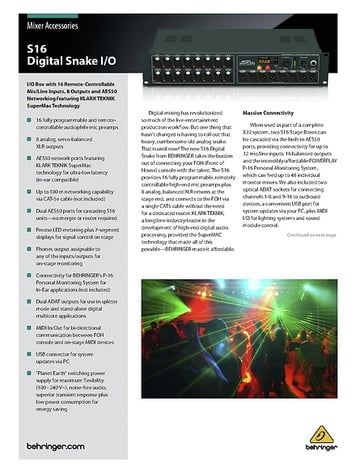 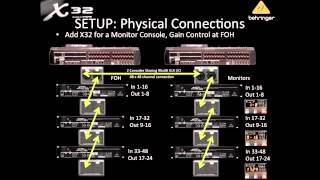 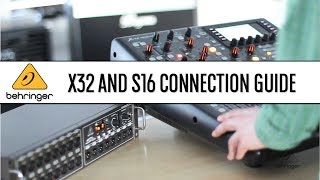 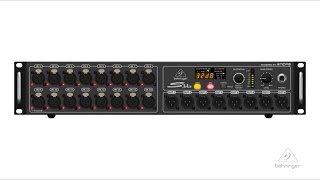 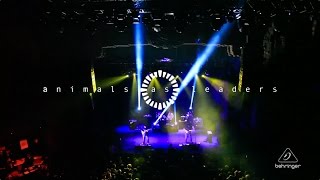 Digital 2.4 GHz radio system with two transmitters and one receiver. The compact size is perfect for mobile applications such as interviews, micro-video recording and Vlogging, Transmitter can be used with integrated microphone or external microphone, Distortion-free signal…

2.4 GHz Digital radio system with one transmitter and one receiver The compact size is perfect for mobile applications such as interviews, micro-video recording and Vlogging, Transmitter can be used with integrated microphone or external microphone, Distortion-free signal…