Served with love! With our cookies we would like to offer you the best shopping experience possible with everything that goes with it. This includes, for example, suitable offers and remembering preferences. If this is okay for you, simply click on "Accept" that you agree to the use of cookies for preferences, statistics and marketing (show all).
Manage cookie settings

Clip Tuner for Guitar and Bass

Time for a tune-up?

Guitarists need to be in tune – unless they want to punish the audience, that is. Even if you can tune by ear, electronic tuners are very helpful when you need to make sure that instruments are uniformly in tune before they are played together. The Thomann CTG-10 Clip Tuner is a highly affordable and space-saving solution and can be simply clipped to the instrument’s headstock. Once in place, the tuner picks up the string vibrations through the wood and is therefore less sensitive to outside noises than tuners that use microphones, for example. What is more, it can be attached to any headstock – whether it’s an electric guitar, an acoustic guitar, or a bass guitar.

As long as the display is illuminated blue, the string is not yet tuned to the desired note. Here, the needle is pointing to the right, indicating that the note is sharp, and the D string has to be slackened slightly in order to lower its pitch. To prevent the string from subsequently slipping at the machine head, the guitar string should instead first be tuned slightly flat and then tuned up to the correct pitch. 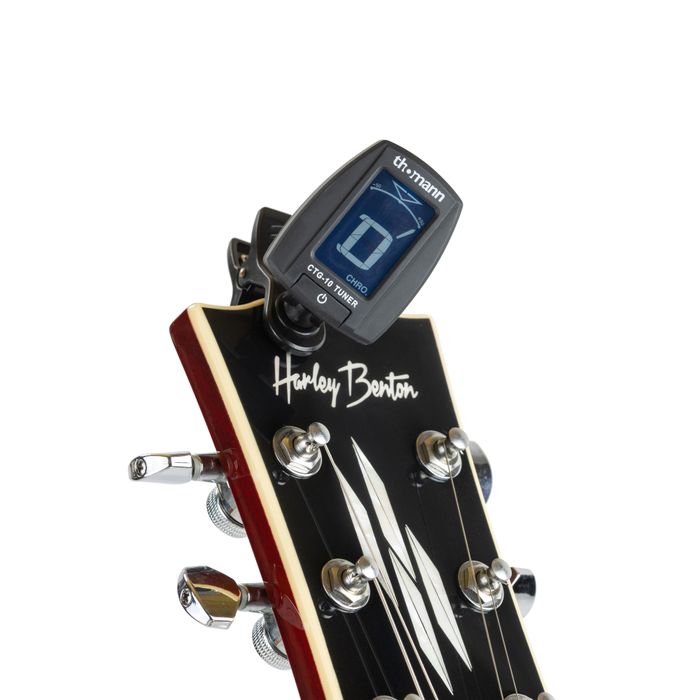 As soon as the string is correctly in tune, the display becomes brighter and turns green. If all of the instrument’s strings need to be tuned, it is a good idea to go back and re-tune each string a second time, since the wood of the instrument’s body and neck tend to shift due to the change in string tension. This process may need to be repeated several times after putting on a fresh set of strings. 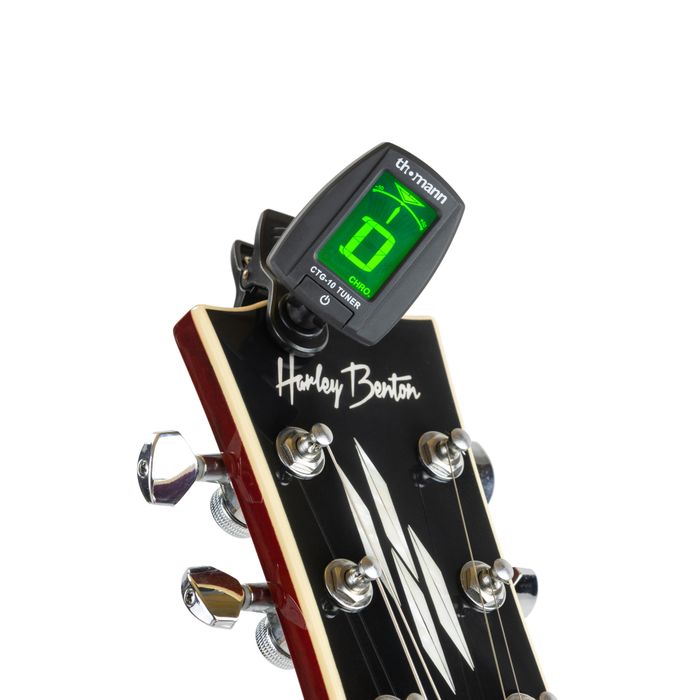 Depending on how the guitar is held, CTG-10 can also be positioned with its display at the rear of the headstock, which makes it easier to read and allows it to be used more discreetly in certain situations. 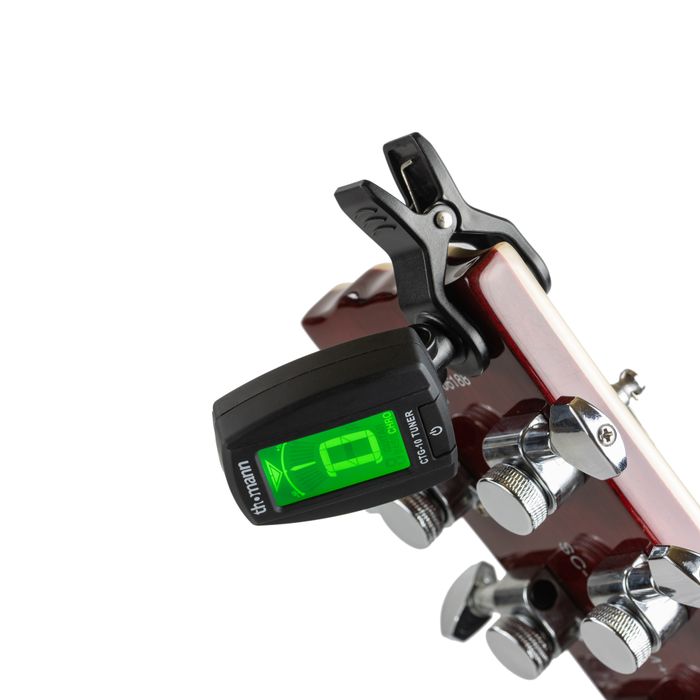 Another advantage of mounting the tuner with the display at the back of the headstock is that it is significantly less conspicuous from the front – very helpful when you don’t want to cover the headstock or have accessories too openly on display during a performance. The tuner’s backlit display is also an advantage on dark stages, since it allows you to check your tuning without needing the house lights. The illuminated display is also not visible to the audience when the tuner is mounted behind the headstock, and yet you can still quickly re-tune between songs even with your volume turned down. 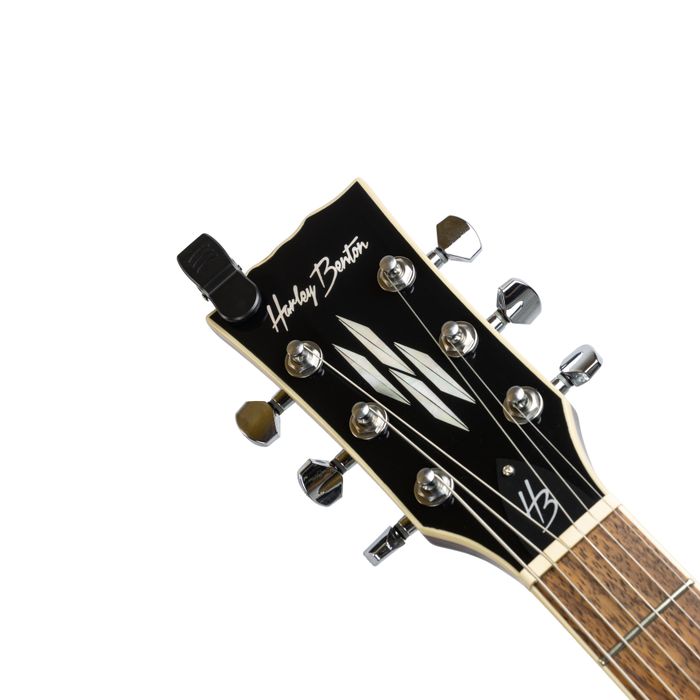 The Thomann CTG-10 Clip Tuner is ideal for guitarists and bassists who are looking for a flexible and versatile tuner on a limited budget, and it also makes a great gift – after all, a tuner is a very important thing to have around, and this one can be used everywhere. Whether you’re tuning your instrument at home, on stage, or by the campfire: The CTG-10 keeps you independent from ambient noise and its easy-to-read display also makes it ideal for tuning in the dark.

Thomann-brand products enjoy an excellent reputation, which also extends to the field of accessories. Hundreds of products from a wide range of different categories are built to the highest levels of quality and offer an excellent price/performance ratio. The use of high-quality and durable materials and the implementation of sophisticated features usually reserved for products in considerably higher price segments make Thomann accessories go-to products in many instances.

Clip on and go

The tuner is activated by pressing and holding the button, and pressing it briefly allows the player to scroll between standard guitar tuning, standard bass tuning, and chromatic tuning mode, the latter of which shows whichever note is currently being played. When standard guitar or bass tuning is selected, only the “concert pitch” notes for the respective instrument are displayed, so the strings cannot be tuned incorrectly by mistake. Chromatic mode is the ideal solution when special tunings (as often used for slide guitar, for example) or tunings below “standard” tuning are required. The display is also articulated and can thus be rotated and swivelled, allowing it to be positioned for optimum visibility from every angle.

M
Fine for the price, not without issues. Mofosir 26.01.2020
Bought this mainly for home use, as I have a pedal tuner for other purposes.

Although it's very light, it does feel nice in the hand - the finish of the plastic is not glossy, rather satin like, almost rubbery, which definitely feels better than just cheapo plastic.
Operation is very straight forward - You hold the button for a second or so for it to turn on, and voila. It is chromatic, and it's both for guitar and for bass. Also, a very nice touch is the fact that there is a backlight , it's blue when You're out of tune, then the entire screen lights up green when You hit the pitch, so it's well suited for low light situations. So, thus far, all good.

The cons that I've stumbled upon are such - on guitars, that aren't exceptionally resonant, it doesn't really pick up the thinner strings all that well - it definitely works, and is usable, but it's not fast as sometimes it won't pick up the vibrations. I've tried it on strats, teles, les pauls, a couple of basses and a classical guitar, and it seems to jump around a fair bit on the strat, less so on the tele and LP, BUT seems to work outstandingly well with basses.
So, if You're buying this for home use, of maybe studio, it is fine - does it's job, sometimes hunts around. All of this is absolutely acceptable, especially considering the price point.
But if You're looking for something fast and responsive for, let's say, live situations, I'd opt for something that's faster/more accurate.
features
quality
handling
3
0
Report

A
Thomann CTG-10 Clip Tuner Anonymous 03.10.2016
The "Thomann CTG-10 Clip Tuner" is one of the cheapest tuners you can buy, because of the low price you could be forgiven for thinking it's not going to much use but it's actually a pretty accurate and useful little tuner.
I usually tune with a BOSS TU-3 pedal tuner when I'm using on my pedal board but thought a little clip on tuner would be useful so that I could tune up without having to plug in and power up my pedal board for a quick practice session, the CTG-10 couldn't be handier for the job.
So far I have used it on my Fender Stratocasters, Fender Telecasters, Fender Mustang, Gibson Les Paul, Gibson SG, Gibson ES335, Epiphone Casino, Danelectro DC59 as well as my Gibson Hummingbird, Martin D28 and Art & Lutherie acoustics and the clip has accommodated all the different headstock shapes and thicknesses with ease.
The tuner is very simple and intuitive to use, a single button turns the unit on and off and the same button toggles between the three modes which are "guitar", "bass" and "chromatic".
To turn the tuner on the button needs to be held down for a couple of seconds so it won't be turned on accidentally in a gig bag or case.
The screen is easy to read and is bright enough to use in the dark but can be a little difficult to see it in daylight or under bright lights.
I have experimented using it along with my BOSS TU-3 and the results are pretty much the same.
It usually works as soon as it's clipped on and only very invasion ally do I need to reposition it to get it to work.
It's small enough that it can be left on the guitar when put away into a hard case and it's cheap enough that you can have one in every case.
All in all a very handy and capable little tuner, really very good value for money.
features
quality
handling
7
1
Report

I got this as part of the bundle of my first acoustic guitar and used it constantly ever since (> 6 months). You can use it for chords (useful when you start learning) or just tune your guitar strings. You can also tune bass, which is a nice extra (didn't use it for that, as I don't own a bass yet). The screen turns green when you hit the perfect pitch, which is a nice visual clue.

Be aware that this tuner must be clipped to the guitar in order to process sound. For an acoustic, clip it around the rosette, and for the electric, clip it to the headstock.

I know it's just common sense, but it makes so much of a difference to practice with your guitar always in tune.
features
quality
handling
2
0
Report

JJ
Afordable tuner for pretty much everyone! Johnny June 14.10.2021
I bought this tuner twice because it's cheap and pretty much does the job. What that means? Tuner itself is really sturdy! My bass felt on stage (it was on stand) when we were changing stage with other band and it was still useable! Only bad side of this tuner is it could sometimes have some bugs or pauses when you're tuning like you didn't strum string but you did. Anyway, it is great little tuner that does the job almost 100%! I'm satisfied and I'm playing to buy more of these.
features
quality
handling
0
0
Report